Africa’s best ever year for professional surfing was launched yesterday (Tuesday) when the 2017 WSL Africa schedule featuring 13 events totaling R13 million in prize-money was unveiled at a media function in Durban to announce the inaugural Volkswagen SA Open of Surfing presented by Hurley.

Taking place at locations that range from Lamberts Bay on the West Coast to Durban on the East Coast, and including an event in Morocco co-sanctioned with WSL Europe, the schedule comprises events for men, women, junior (18-and-under) men and women and also incorporates outreach programmes designed to spread the stoke of surfing.

Sanctioned by Surfing South Africa, the national governing body for the sport, the local events will be a huge benefit to South Africa’s current and future surf stars who will be able to accumulate prize-money and coveted World Surf League (WSL) Qualifying Series (QS) ranking points at their home breaks without having to incur exorbitant international travel costs. The points will also qualify them for entry into the major events overseas.

May 20-21 sees the BOS Cape Crown presented by Billabong taking place at Long Beach, Kommetjie in Cape Town. This Surfing South Africa initiated event is first of three stand-alone JQS1,000 events for junior men and women that include the Billabong Junior Series events at Ballito (June 27-29) and Cape St Francis (Sep 22-25). Points from these events will also count towards the 2017 WSL Africa Junior titles and selection of the four men and two women who will represent the region at the WSL World Junior Championships in Australia next January.

Competitors in all four categories will be logging up the air miles as they return to Big Bay in Bloubergstrand for the QS1,000 and JQS1,000 rated Jordy Smith Cape Town Surf Pro presented by O’Neill (June 23-25) which will take place under the iconic landmark of Table Mountain.

Then it’s back to the mid-winter warmth of KZN where the Surfing South Africa Ballito Trial takes place prior to the Ballito Pro presented by Billabong on 1 July. The women’s event runs June 30 to 2 July and the R3.3 million, QS10,000 rated men’s event will feature 100 of the world’s best surfers from July 3 to 9.

All of the world’s top 34 ranked surfers will be in action at Jeffreys Bay from July 12 to 23 in the newly named Corona Open J-Bay, the sixth of 11 stops on the Samsung Galaxy WSL Championship Tour, where they compete for a share of R7.5 million and ranking points in the race for the 2017 world surfing title.

The final WSL Africa event for men and women is the co-sanctioned Anfa Place Casablanca Pro in Morocco from September 12 to 17 which offers QS1,500 rated events for both categories.

“I’m proud and honoured that WSL Africa has now grown to the point where the country’s current and future surf stars can compete in locally based events and advance their careers by earning enough rankings points and prize-money to qualify for major events elsewhere without having to spend a small fortune chasing around the globe,” said long serving WSL Africa Operations Manager, Colin Fitch.

“My sincere appreciation goes to the local authorities and the SA surfing industry for their support and we welcome the contribution from sponsors like Volkswagen, Corona, Red Bull and Jordy Smith. Huge thanks also to our marketing agents, Accelerate Sport, and to Surfing South Africa and its Districts who are great partners in this region. And finally, this goal could not have been reached without the input of WSL Africa’s dedicated staff and of course our surfers whose continuing support is the reason we now have one of the WSL’s strongest regional schedules of events.”

The Cell C Goodwave, an invitational event has a one year waiting period for the best waves at New Pier in Durban and has received a specialty sanctioning from both Surfing South Africa and the WSL. The one day event offers a R100,000 prize-purse to the winning surfer.

The five events making up the City Surf Series will each host activities coordinated by Surfing South Africa, the national controlling body for the sport, and run by the outreach projects in the various locations, designed to foster and encourage surfing among young people, regardless of their background.

See more about the WSL schedule of events at www.WorldSurfLeague.Com and on the WSL App 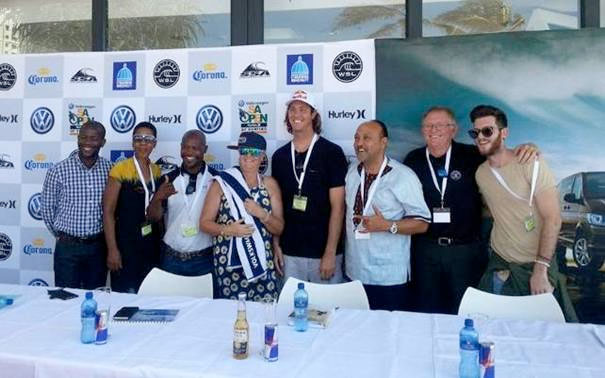 Pictured: The inaugural Volkswagen SA Open of Surfing presented by Hurley was launched at a function in Durban on Tuesday. Photo: Courtesy WSL

Surfing South Africa is recognised governing body for all disciplines of surfriding and is a member of the South African Sports Confederation and Olympic Committee (SASCOC) and the International Surfing Association (ISA).

About the World Surf League

The World Surf League (WSL), formerly the Association of Surfing Professionals (ASP), is dedicated to celebrating the world’s best surfing on the world’s best waves through a variety of best-in-class audience platforms. The League, headquartered in Santa Monica, is a truly global sport with regional offices in Australasia, Africa, North America, South America, Hawaii, Japan and Europe.

The WSL has been championing the world's best surfing since 1976, running global events across the Samsung Galaxy Men's and Women's Championship Tours, the Big Wave Tour, Qualifying Series, Junior and Longboard Championships, as well as the WSL Big Wave Awards. The League possesses a deep appreciation for the sport's rich heritage while promoting progression, innovation and performance at the highest levels.

Showcasing the world's best surfing on its digital platform at WorldSurfLeague.com as well as the free WSL app, the WSL has a passionate global fan base with millions tuning in to see world-class athletes like Mick Fanning, John John Florence, Stephanie Gilmore, Greg Long, Gabriel Medina, Carissa Moore, Makua Rothman, Kelly Slater, Adriano de Souza and more battle on the most unpredictable and dynamic field of play of any sport in the world.